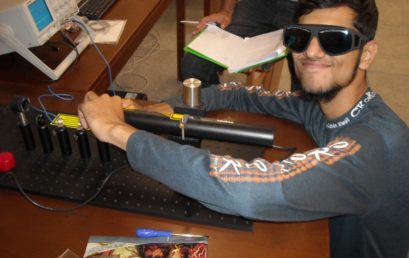 come in contact with research scientists and learn the basic skills and traits of the experimental paradigm. The Physics lab (PhysLab as it is called) first opened its doors to its first batch of 150 students in Fall 2008. Boasting experiments from basic classical mechanics to the more state-of-the art experiments on superconducting quantum interference devices, the lab is a definite first in the country. It was set up by Assistant Professor of Physics, Dr. Sabieh Anwar and his illustrious team at the SSE.

Each year the lab course runs for about 10-12 weeks, covering wide range of topics in Experimental Physics. These experiments employ cutting edge technologies and softwares such as Matlab and Labview, preparing students for the industrial setting imbued with automation, data acquisition and computer control. Thus from the very start, our students are exposed to data acquisition and processing, skills that many undergraduate students around the world traditionally learn in second or third year of their undergraduate studies.

Since its inception, the Physics Lab has made significant strides and achieved several milestones. Several experiments that students perform in their first year have been accepted and published in leading international journals as the European Journal of Physics and Americal Journal of Physics, emphasizing the point that the lab is fully equipped to train SSE students in world class experimental techniques. These papers were co-authored by Sohaib Shamim, Wasif Zia, Umer Hassan and Dr. Sabieh Anwar. 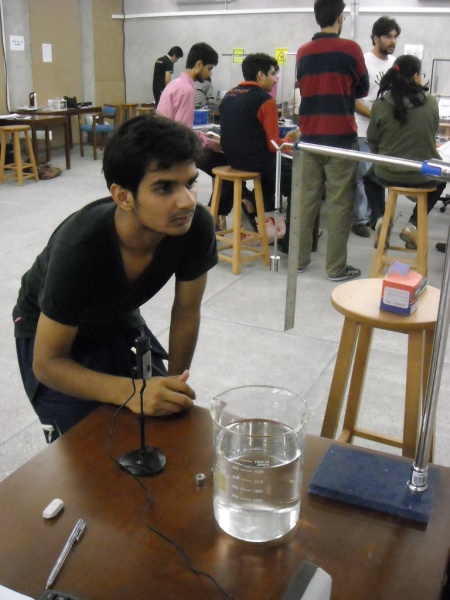 One of the important milestones is the goal of self-reliance: maximizing the use of locally available, homemade and indigenous resources for the development of experimental research. For the purpose the Lab has established a small machining centre that helps us build most of our everyday scientific equipment. The lab’s most popular activity, currently is the Hunerkada, where students learn basic lab skills such as drilling, machining, cutting, making circuits, performing simple measurements and dealing with errors.

During the summer of 2009, a delegation of Institute of Space and Technology, which is the educational face of the country’s space agency SUPARCO,  visited the Physics Lab and expressed interest in reproducing our experiments.

Dr. Sabieh Anwar, the Principal Investigator of this project and the team lead, was also invited to present details of the lab at the Physics Department of the Quaid-e-Azam University. The Physics Lab considers these academic bridges as a cornerstone, and it appears that the Lab is actually starting to take a leadership role in the country.

PhysLab also started an internship program in Summer 2009 in which 15 students participated. This provided them an opportunity to work with research scientists, providing them insight into research, and helped them in developing various skills. During this period students developed new refractory materials for controlled heating, measured the speed of sound, used photometric techniques to detect rotational motion, looked at the statistics of background radioactive emissions and measured gravity using falling magnets, to quote a few examples.

Several interns later joined in the Fall semester as demonstrators in the lab and helped freshman students perform experiments. Physics Lab is also developing several cutting edge experiments that students will perform in their 3rd year. These experiments will include topics as diverse as ECG measurements and Nuclear and Particle Physics to detect cosmic muons (high energy particles from upper atmosphere) and measure their lifetimes which happen to be about one-millionth of a second, from the use of superconducting devices to measure magnetic fields millions of times smaller than the earth’s field and finding the band structure of semiconductors. The most exciting times are yet to come.

And of course, we also have some fun time in the lab. Recently, students were treated with lab-made ice cream (a slightly different, and refined, version of home-made ice cream) using liquid nitrogen at nearly -200oC. At such low temperatures, it takes only about 5 minutes to make ice cream! It’s a real treat!