The Advanced Experimental Physics Lab (PHY 300/500) is indeed one of the most challenging yet intriguing courses offered by the Physics Department at LUMS.

Jonathan Reichert in a guest editorial in the American Journal of Physics once wrote how the advanced physics lab should be considered the hallmark of a Physics Department. On these lines, the Physlab team strives to continually enhance the advanced lab experience, which we must point is not easy.

Students generally are over-worked from a busy schedule in their teaching course load, especially if they are juniors; while lab work requires perseverance, a penchant for troubleshooting, understanding queerly behaving instruments and being largely independent, without anyone who could respond to late-night SOS calls. This is coupled with the Professor Dr. Sabieh Anwar’s continuous reminders on the importance of lab notebooks and sharing details on the process rather than on the results. The tedium of this lab work is enough to wear down the students.

But in a short time-span of four months, the course aims to not only expose students to the experimental route of understanding various classical, quantum, and optical phenomena but also motivate these young physicists to design new experimental techniques for obtaining more precise results, sharpening their ability to understand natural phenomena, practice how tools and instruments work and to catalyze the innate talent of some students to create new experiments. These learning objectives are against the backdrop of dwindling attention towards practical work in schools and colleges. The alternative to practicals route has led to many students missing out on the dexterous aspect of conducting experiments. It’s quite a sight seeing students of the I-generation and the E-generation setting aside their mobile phones and working with the instruments, tools, circuits and pendulums.

The advanced physics lab is also a precursor to the Engineering Physics Project Lab whose sole aim is to design and create new experimental schemes, apparatuses and systems which can enable new lines of scientific inquiry.

In the Fall of 2019, we had around 20 students in the Advanced Physics Lan who worked on over 15 different projects. These experiments belonged to optics, nonlinear dynamics, quantum interference, kinematics, video tracking, microscopy, etc. Many students began with pre-designed lab experiments (some of them designed by physics and engineering alumni) and after having acquired appropriate skills to handle high-tech equipment and complex subjects, they were able to branch off with new ideas. There were no set results that were being chased after; rather new directions appeared as the weeks progressed by.

For example, the nonlinear dynamics of a chaotic system were observed in two major experiments: the nonlinear magnetic pendulum and a resistor-inductor-diode circuit. Several in-house types of equipment such as an angle detector and a data logger (PhysLogger) were used to acquire data. Moreover, Usman and Maryam were involved in designing paper-based circuits and analyzing them by impedance spectroscopy. Using a simple graphite pencil to sketch electric components on paper, they were able to imitate parallel and series capacitors and resistors in a circuit to remarkable accuracy. Abdullah was trying to implement differential dynamical microscope of polystyrene microspheres and in the process was seen tinkering an optical microscope and replacing its eyepiece with a high frame rate digital camera. Another student, Irfan was using an optical lever to image the surface of water feebly distorted by a magnetic field.

Along with learning new experimental techniques, the lab also focused on exploring various curve-fitting methods and minimization techniques to analyze the data. In order to make it more efficient and rigorous, Sabieh Anwar assisted by Fatima Perwaiz conducted several lecture-based classes at the start of the course. Through three sets of assignments, it was ensured that students are well-acquainted with techniques like gradient descent method, the Levenberg-Marquardt algorithm, and simulated annealing. Students were also shown how to solder, mill, turn and machine.

Lastly, the lab laid great emphasis on teaching students the art of technical writing. At the beginning of the semester, a writing workshop was conducted by Fatima to discuss how scientific writing is different from regular writing and what are the do’s and don’ts when compiling a professional lab report typeset in LaTeX. 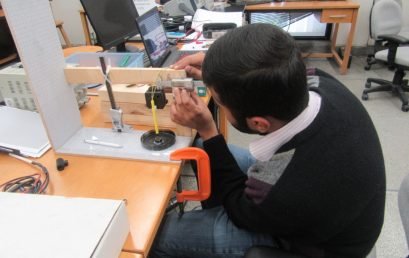 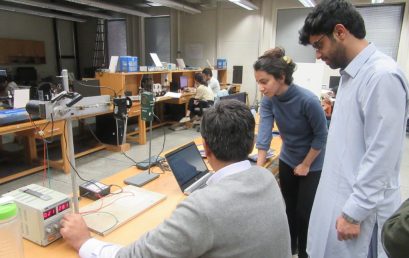 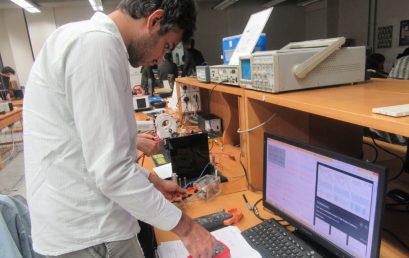 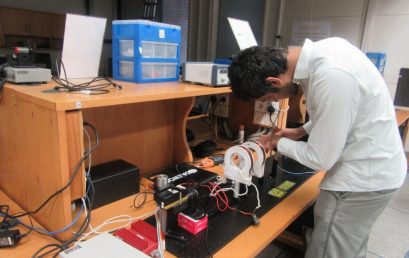 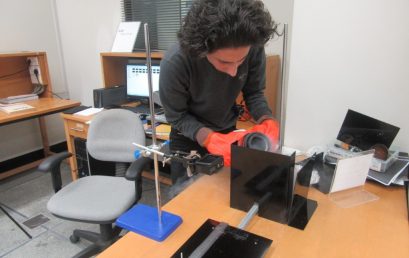 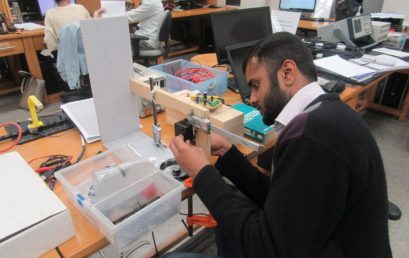 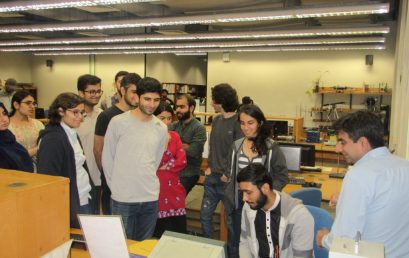 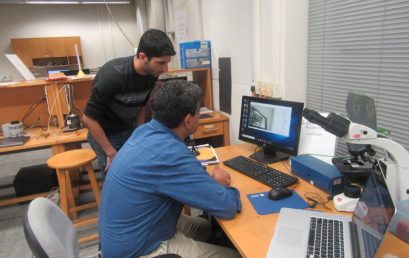 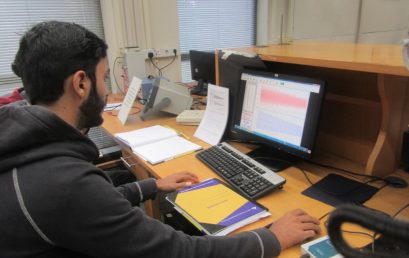 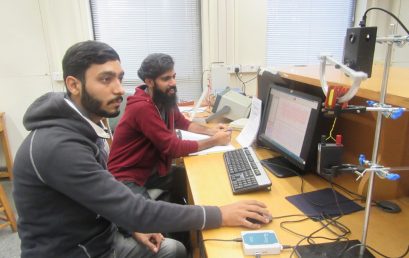 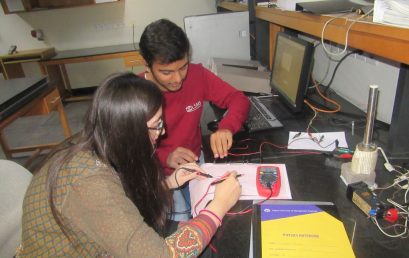 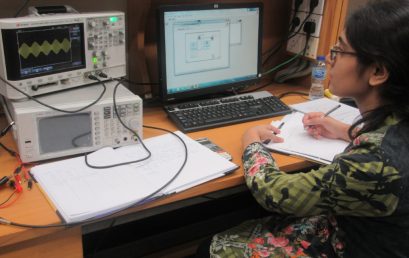 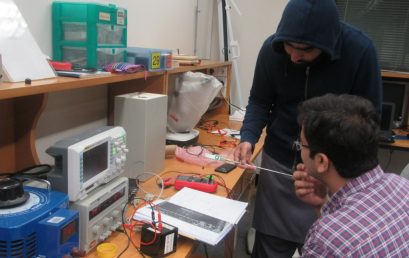 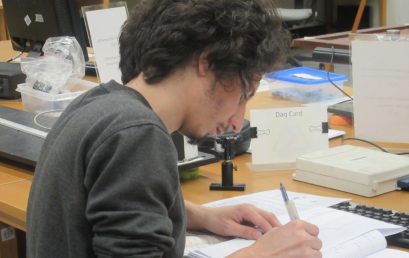 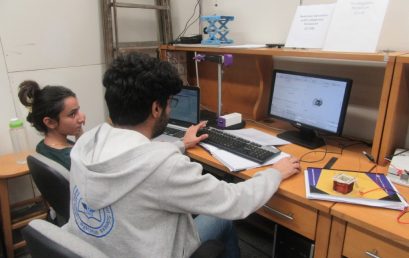 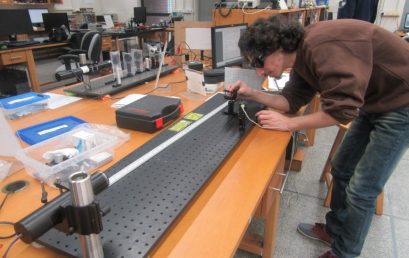 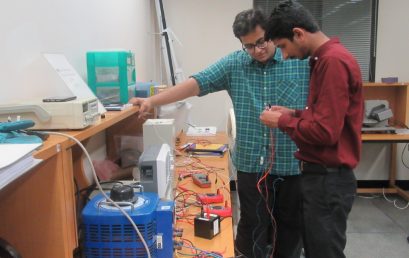 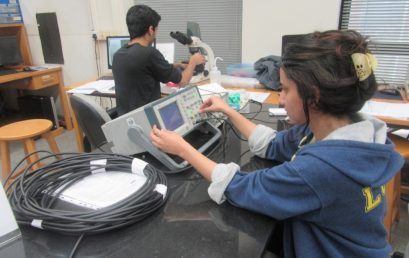 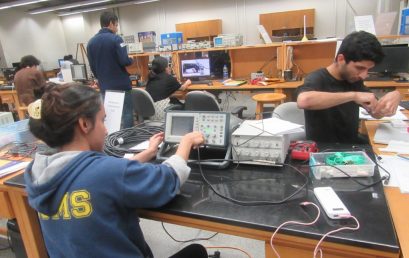 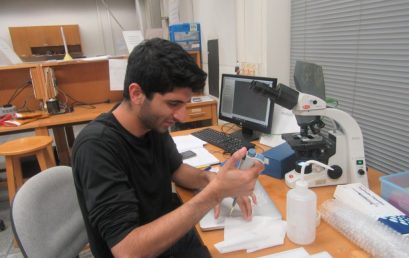 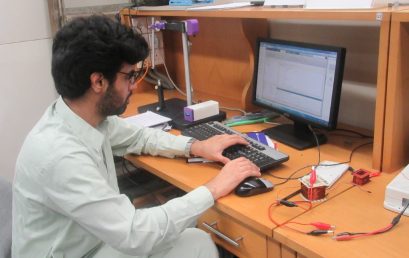 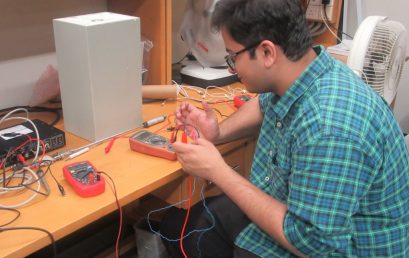 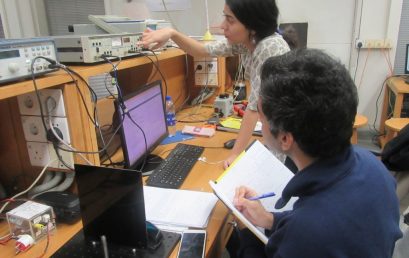